Last week’s Tip of the Week Post focused on proximity searching and finding two words that are within a certain distance from each other. If you missed that post, we recommend you take a quick look at it if you often construct complex searches. This week, we’re going to focus on Wildcard Searching. Wildcard Searching allows you to find various formations of a word, such as the plural or past tense of a word. For example, you may want to find references to the Clayton Act and all variations of the term interlock (interlocks, interlocking, interlocked). We have outlined some basic rules below for using wildcards, as well as a few examples.

We are pleased to announce that MyHein will be released at the beginning of July! Yes, it’s true, we are ready to release this new enhancement for all HeinOnline users. We would like to thank all of the MyHein Beta testers for their valuable feedback and suggestions. We have integrated the feedback and suggestions into the development of this enhancement and hope you’ll find this to be a useful tool as you spend time researching in HeinOnline.

Here are a couple of sneak preview screen shots of this new enhancement! With the live release, we will provide further documentation, help guides, videos and other training materials to help you get started. 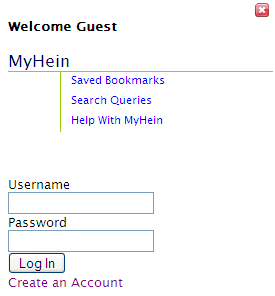 Bookmark articles and organize and create your own tags…

Do you often have a group of key terms that you want to search for but your terms don’t necessarily form an exact phrase? Or, when you search for the terms as a phrase you get no results? If this sounds like the kind of search terms you have, you may want to try conducting a proximity search.

Do you need to update, change, add or remove an IP address from your subscription? If you are an administrator of HeinOnline at your institution, you may request changes to your registered IP addresses. To request a change to your registered IP’s, please send an email to techsupport@wshein.com with the following information:

1. Your Contact Information (Name, Phone Number and Email Address)
2. Institution Name
3. Description of the changes that need to be implemented

Please do not call us with this information, as we are unable to accept these requests via phone. For confirmation purposes, we require the request in writing.

If you are requesting an addition of a new IP address…

What can you expect with today’s monthly content release? We are releasing 800,000+ pages of new content, bringing HeinOnline to more than 38 million pages! We added 99 new World Trials and 23 new Legal Classics titles this month. Also, Statutes of the Realm, volumes 1-11 (1225-1713) are now available in the English Reports library. New additions to the Law Journal Library include Criminal Law Quarterly, volumes 1-49 (1958-2005) and Taxes: The Tax Magazine, volumes 1-82 (1923-2004). For a complete recap of content released this month, click here.

In addition to the new content released, we also released improvements to some of HeinOnline’s features, as outlined below.

As of the April 2008 release, a cumulative file containing MARC records for all titles in the HeinOnline Legal Classics Library is available. This single file is comprehensive and includes records for all titles since the initial release of the Legal Classics Library in April 2005. The cumulative file will be updated with each monthly content release in addition to the individual shipment files. This now provides you with two different options for updating your records.

The cumulative MARC file is available for download from the Legal Classics Library Cataloging Aid page at https://washburnlaw.edu/heinonline/lcl/; see the bottom of the right-side navigation under the heading “All Legal Classics MARC Records”.

The second part of the collection is a database in which the sources of several legislative histories have been compiled and presented. The Sources of Compiled Legislative Histories Database is derived from the loose-leaf publication Sources of Compiled Legislative Histories: A Bibliography of Government Documents, Periodical Articles, and Books by Nancy P. Johnson, Law Librarian and Professor of Law Georgia State University College of Law…

With only 24 volumes left to be added to HeinOnline, we are pleased to announce that the Congressional Record bound volumes will be completed by the end of June! This is a tremendous effort and we are very excited to be able to offer this to you. For the first time ever, you will have access to the complete printed chronicle of debates, proceedings and speeches of the United States Congress dating back to its first year of publication in 1873. We are proud to announce that this is something that only HeinOnline currently offers the legal research community. You will be able to access the complete and accurate accounts of congressional matters for the last 135 years!

Click here for more information about the Congressional Documents collection…