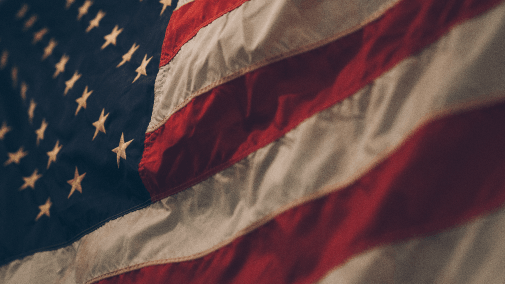 About de Tocqueville's Democracy in America

In 1831, two Frenchmen, Alexis de Tocqueville and Gustave de Beaumont, arrived in New York City with a commission from the French Government to study American prisons and penitentiaries. Under this pretext of official business, the life-long friends spent the next nine months traveling throughout the young United States, studying the effects of democracy on American society. When they returned to France, they submitted a report on American penitentiaries as duly charged. Then, in 1835, de Tocqueville published the real fruits of their travels—the first volume of his masterwork: De La Démocratie en Amérique, or, as it is known in English, Democracy in America.

A lifelong politican, Alexis de Tocqueville was interested in comparing democracy in America to what he saw as democracy’s failing in France. The America that Tocqueville and Beaumont visited in 1831 was one that was rapidly and radically transforming under the philosophy of Jacksonian democracy. Manifest destiny was physically expanding the country from sea to shining sea. Suffrage had been granted to most white men over the age of 21. Industrialization was moving America from an agrarian to a capitalist society, an irreversible change that sometimes improved but forever altered living standards for the average American, while also aggravating sectional tensions between North and South.

Critical and prescient, Democracy in America is both an observation of America and a warning to it, a study of democracy and of the dangers within it, containing the author’s first articulation of what we know today as the Tocqueville effect: that as social conditions improve, societal frustrations increase.

HeinOnline is proud to partner with Alan Keely, retired Associate Director for Collection Services at Wake Forest Law Library, to showcase a new and exciting version of de Tocqueville’s classic work, complete with more than 1,000 annotations and references. Meticulously researched by Keely, this interactive digital edition takes researchers back to Alexis de Tocqueville’s 1831, providing full-text links to the works de Tocqueville read while he traveled, researched, and wrote Democracy in America. Keely’s annotations provide insight into de Tocqueville’s thinking, grounding the work within the context in which it was written.

Jump from the pages of Democracy in America into the works referenced by de Tocqueville with HeinOnline’s unparalleled access to historical content. Pull up full-text images right to the referenced portion and then dive deeper, easily navigating between both the referenced work and de Tocqueville’s. Move on to secondary references for more analysis and discussion of the continuing relevance of this classic work today.

Discover full-text images of both Democracy in America and its hyperlinked references within, easily navigating between PDFs that preserve the look and feel of the original text. 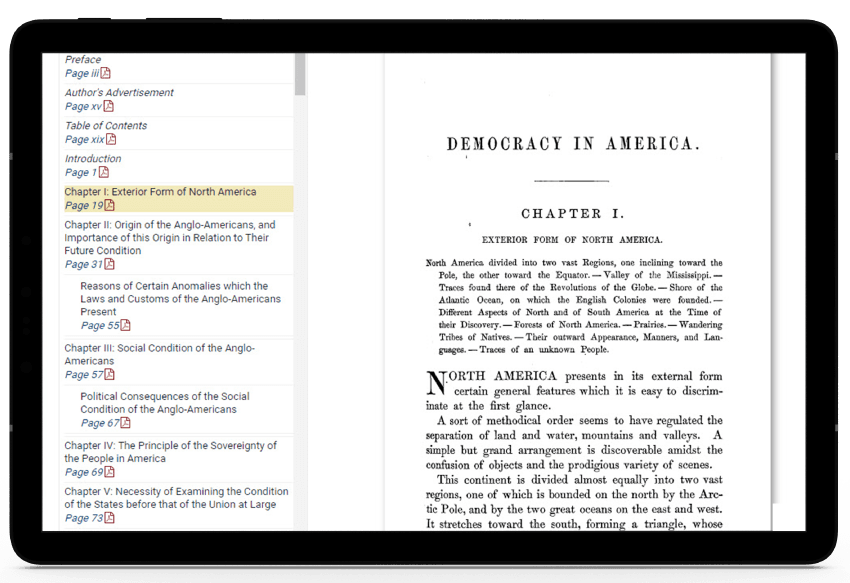 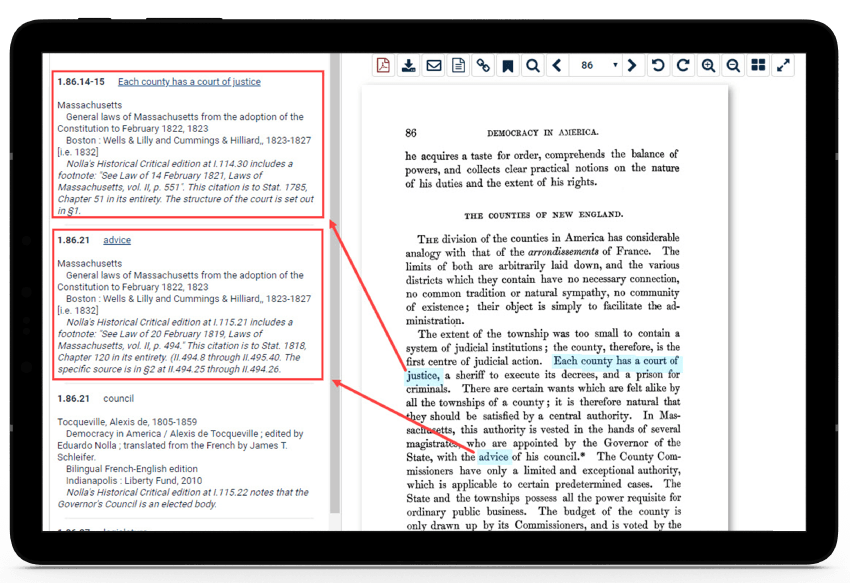 The unique "Sources" feature included in this database directs the user to Keely's deeply researched annotations on de Tocqueville's text, providing links (when available) to the full text of the material discussed. Learn more.

This database contains a growing collection of the many digitized editions and translations of Democracy in America that have been published over the past two centuries. 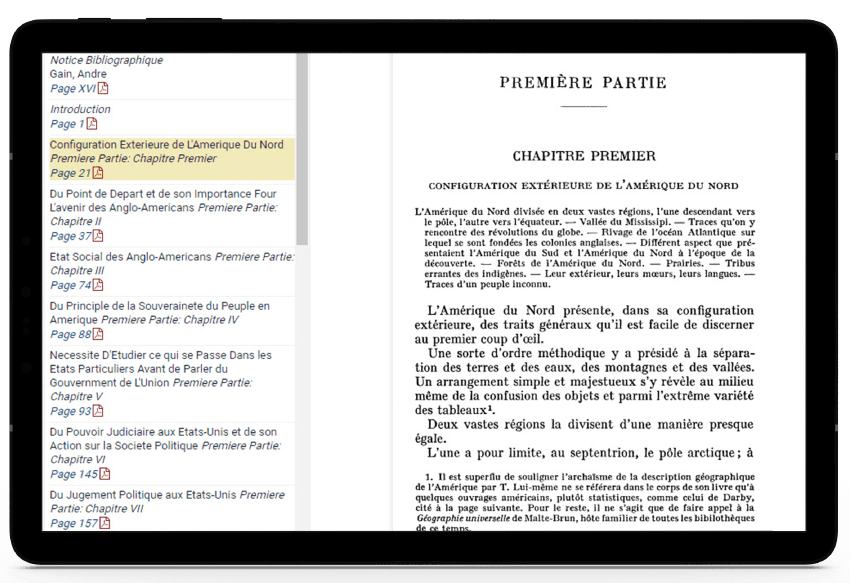 A Note about the Interactive Edition

Because the majority of HeinOnline users are likely to be English speakers, an English translation serves as the basis for this digital edition.

While newer English translations published in the latter half of the 20th century and into the 21st century are more attuned to the nuances and subtleties of the French and English languages, copyright restrictions prohibit the use of these editions for this project. Further, of the numerous editions published since 1945, most are of the problematic Reeve translation. Hence, given the bibliographic linkage between the various editions from Alexis de Tocqueville and Reeve to Bowen, the Bowen text published in its first edition (Cambridge, Mass.: Sever and Francis, 1862) was chosen as the basis for our digital edition.

Alan Keely, retired Associate Director for Collection Services at Wake Forest Law Library, is a librarian by profession with a strong background in history and literature. After reading Democracy in America during the summer of 2017, Keely imagined that linking all of the source material which Tocqueville had used or cited when writing his book could add another dimension to the experience of reading the classic.

Keely painstakingly researched the book, identified sources, provided analysis and annotations, built the links, and entered all of the data for the digital edition to ultimately create an interactive version featuring citations, links, and extensive editorial notes. 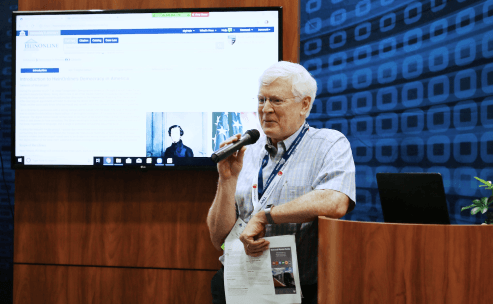 Please note: a HeinOnline representative will contact you within 24-48 business hours to verify this purchase request.