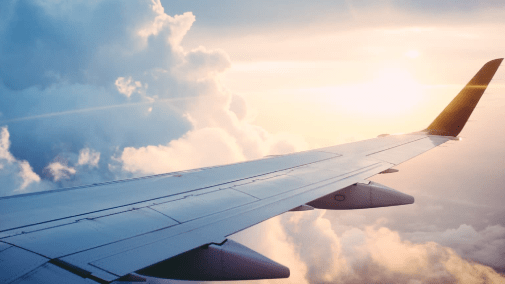 A collection of books, documents, reports, and more illustrating the multitude of ways humans interact with and explore the earthly skies and distant reaches of outer space.

Air and space law refers to the legislation that regulates flight. Humankind has always dreamed of flying. But it wasn’t until 1783, when the French Montgolfier brothers launched the first hot air balloon, that the dream of flight suddenly became a tangible possibility. Hot air balloons led to airships, gliders, and eventually airplanes, with the Wright brothers successfully launching the first plane in 1903. Ever since, the possibilities to travel among the clouds have continuously expanded, and today humans fly around the globe every day.

But what of the stars? While it had taken humans centuries to learn to fly, it would take only decades for them to launch into space. Realistic proposals for methods of spaceflight date back to 1903, while the German V-2 ballistic missile was the first object to travel into space in 1944. The Soviets launched their first satellite, Sputnik 1, in 1957, initiating the Space Race between the United States and the USSR. In 1969, the U.S. successfully landed the first humans on the moon. Today, focus has expanded to exploring other realms of space, with commercial companies complementing government space programs in the hopes of one day making space travel accessible to the paying public.

About the Air and Space Law Database

HeinOnline’s Air and Space Law database illustrates the history of air and spaceflight through the programs and people that made these dreams possible. Through the collection, users will see how governments and regulators reacted to new technologies, the accidents and disasters that prompted reform, and the new frontiers that await as technology advances at an improbable speed.

HeinOnline editors have analyzed and subject-coded every title in this collection, creating and assigning 29 unique subjects to help users find material most relevant to their research. Further categorizing the content, this entire collection is organized by Outer Space and Suborbital Space, separating titles dealing with matters on celestial bodies (Outer Space) from those concerned with earthbound air travel (Suborbital Space).

To help users navigate the content spanning this extensive database, all titles in the collection have been categorized into 29 subject areas:

Find titles related to the tech that makes planes fly and sends objects into outer space, and how these technological advances trickle down into everyday life.

Find information on the different machines that take to the skies and the regulatory hurdles they must clear to do so.

This subject deals with matters related to commercial airlines, including their obvious role shuttling commuters and vacationers around the world, but also the ways aircraft pilot our world, from moving cargo and mail to servicing remote communities, and other civil aviation matters.

This subject deals with airports, both generally and specific airports, as well as their funding, security, and operations.

This topic has to do with how airspace is regulated, how airspace priority and sovereignty is determined, and the challenges in managing airspace in conjunction with new technology and craft (e.g., drones).

This topic deals with aviation accidents, collisions, crashes, attacks, and disasters, as well as the agencies charged with investigating and preventing such occurrences.

This subject covers the various ways agencies oversee aviation operations, whether it is hot air balloons or the planes of major airlines.

This subject covers aviation safety and security concerns, including systems and rules put in place to keep fliers safe.

Drones, formally known as unmanned aerial vehicles, were developed in the mid-20th century for military use, but in the last few years they have proliferated in civilian use. Whether for photography, videography, traffic monitoring, agriculture, or just for fun, these mighty little robots come with big regulations.

Aviation has fundamentally changed how the world works, but it has not been without effects. Whether it is noise pollution, impact on bird migration, air pollution, or the technological search for better fuel, explore these issues and more using this subject.

The Federal Aviation Administration (FAA) is the federal agency responsible for regulating civil aviation in the United States. It creates and enforces regulations on the manufacturing, operation, and maintenance of aircraft; certifies pilots and airports; and ensures safe air traffic control.

Not one country holds dominance over outer space, just as not one country flies in the skies. Understand how the global community works together to preserve our mutual stake in the ether with this subject.

Not one country flies in the skies, just as not one country holds dominance over outer space. Understand how the global community works together to preserve our mutual stake in the ether with this subject.

Airplanes, missiles, and drones form an important part of the nation’s defense forces, often intersecting with civil aviation. Find out how, as well as the unique challenges of military aviation, with this subject.

While we often think of NASA and astronauts in space, the military plays a vital role in outer space activities, from launching satellites, to technology development, to the missions and activities of the U.S. Air Force and Space Force.

The National Aeronautics Space Agency is the federal agency responsible for the civilian space program and for conducting aeronautics and space research. Its research studies Earth, the solar system, and beyond, and the technologies it develops to take humans beyond the stars also benefit life back on Earth.

The men and women who fly planes, pilot balloons, and journey into space, as well as those who serve passengers and work on the ground, are vital components to the aviation and aeronautics industry. Learn how they all intersect.

Learn about the visionaries and dreamers who helped realize the reality of human flight.

Learn about the visionaries and dreamers who helped humankind walk among the stars.

Race to the Moon

Travel back in time and learn about how the race to see who would land a man on the moon first launched the Space Age.

Since their first launch in 1957, satellites have fundamentally changed modern life. They are used for GPS navigation, for weather forecasting, for planetary exploration and military applications, and provide us with television, radio, internet, and telephone signals. Learn about their essential roles.

Securing outer space has implications both for domestic national security and for the safety of the global community. Learn about the various unseen challenges in the skies above with this subject.

Commercial entities have long complemented government space programs. In recent years, companies such as SpaceX have aimed to take the paying public into space. Explore the future possibilities in this subject.

Space missions go far beyond the moon. Whether it is the detailed images from Hubble, Cassini probes to Saturn, or rovers rumbling along on Mars, this topic covers other space exploration programs, their findings, and their successors.

Learn more about the Space Shuttle Program, NASA’s fourth human spaceflight program. In its 30-year history, the shuttle program made routine Earth-to-orbit journeys in reusable spacecraft vehicles which became indelible in the public’s imagination and association with NASA.

Space stations, primarily the currently operating International Space Station, allow for a continuous human presence in space. While the ISS is currently the only space station in orbit, it is not the first. The ISS and its predecessors are laboratories for experiments, observation stations, and provide a staging base for other space missions. Learn more in this subject.

Created after 9/11, the Transportation Security Administration (TSA) is charged with protecting the nation’s transportation systems, but travelers are most familiar with the agency through its work screening passengers at airports and its regulations on air travel. Explore the agency’s work with this subject.

While air travel and space exploration share principles of physics, technological advancements, and personnel training, they are ultimately separate spheres with their own unique challenges and concerns. To help users target their research, content in this collection is organized into Suborbital Space and Orbital Space.

Suborbital Space is the term HeinOnline is using to refer to all aviation matters below orbit. Under this categorization, users can find titles dealing with:

Outer Space refers to all publications dealing with matters above and beyond Earth. Under this categorization, users can find titles dealing with:

Browse hundreds of books ranging in date from the early 1900s to present day. Find accounts of the Wright Brothers’ flights, stories of Russian cosmonauts, treatises on aerial warfare, monographs on the business aspects of aviation, and more.

Some titles you may want to check out include:

The deliberations of Congress provide insight both into issues requiring federal attention and their proposed solutions.

Some Committee Prints of Note:

Some Congressional Hearings of Note:

The Code of Federal Regulations (CFR) and the U.S. Code represent the current statutory positions of the federal government. Published annually, the CFR is divided into 50 titles (aka topics, subjects, etc.) that are the codification of the general and permanent rules published in the Federal Register by the executive departments and agencies of the federal government. The U.S. Code, divided into 53 titles, is the official compilation and codification of the general and permanent federal statutes of the United States. Main editions of the U.S. Code are published every six years, with supplements published annually. Unlike the CFR, the U.S. Code does not include regulations issued by executive branch agencies.

Legislative histories present the journey of a bill as it becomes a law, with all its changes, additions, deletions and various legislative hurdles.

There are more than 50 legislative histories within this database, including: 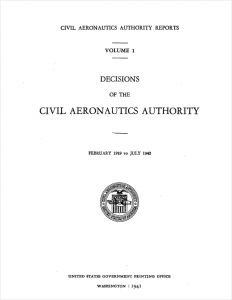 Browse serials and periodicals dedicated to aviation and space matters, including:

Access hundreds of articles* selected by HeinOnline editors on the Warsaw Convention, agreements in outer space, drones, warfare in space, aviation security in a post-9/11 world, space tourism, airline disasters, and more. Sort articles by Title, Author, Most-Cited, or Year, or search the list by Title or Author.

*In order to access the scholarly article links, you must be subscribed to the appropriate HeinOnline collection(s).