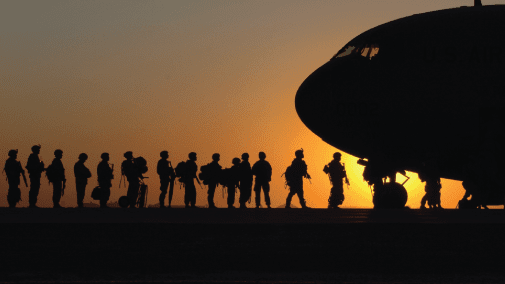 Thousands of diverse publications related to the history, glory, might, and daily nitty-gritty of administrating America’s fighting forces.

Research the History, Glory, and Nitty-Gritty of the U.S. Military

Establishing and maintaining a military force is one of the oldest traditions in human history. After centuries of military administration and development, the United States Armed Forces are now considered the world’s most powerful.

Made up of six service branches—the Army, Marine Corps, Navy, Air Force, Space Force, and Coast Guard—their mission is to protect the United States and U.S. interests at home and abroad. Aside from their obvious role as a fighting force, the missions of these branches have evolved over time to include humanitarian assistance, natural disaster relief, rescue operations, and policing the seas against piracy and drug smuggling.

With such crucial responsibilities, the military continues to be paramount in the defense and betterment of the United States. As such, it is an institution that receives an enormous amount of policy consideration, funding and appropriations, administrative hours, technological resources, and political debate as compared to others. In addition, an effective U.S. military necessitates significant dedication of resources toward recruitment, training, retention, and care for its personnel; the uniqueness of these practices and procedures, in turn, makes the military a distinct social subculture complete with its own norms, values, and concerns. Thus, just by its nature, a study of the U.S. military is inherently multidisciplinary— simultaneously a study of history, politics, sociology, economics, human rights, medicine, technology, mental health, employment and labor, and more.

About the Military and Government Database

HeinOnline’s Military and Government allows users to research the functions of the federal government in administering these essential armed forces, as well as the issues confronting service personnel both on and off the battlefield—from women’s changing role in the military to the development of new weaponry to navigating benefits offered by the Department of Veterans Affairs after service. With funding to the Department of Defense making up the largest portion of the U.S. federal budget, users can also find publications devoted to debating and accounting for appropriations and other funds spent.

Start your research with primary source documents such as committee prints, government reports, congressional hearings, legislative histories, and the entirety of three Code of Federal Regulations Titles (6, 32, and 38) and multiple relevant U.S. Code Titles (6, 10, 14, 32, 34, 37, 38, and 50). Supplement with thought-provoking books, serials, periodicals, and scholarly articles, carefully curated and added to this database for their analyses and discussions of military life, operations, administration, and related issues. Finally, also find the entirety of the Pentagon Papers in a fully searchable format, allowing researchers access to these essential documents for understanding foreign policy, the Vietnam War, and chain-of-command decision-making.

To aid users in browsing and searching all of this content, every title in the database has been subject-coded based on the topic discussed and service branch in question (where applicable). Nearly 30 subjects have been identified—see a sampling of them below:

Understand military alliances and international coalitions such as defense pacts, non-aggression pacts, ententes, and more, as well as their responses to crises.

Discover publications about specific wars in U.S. military history or other such armed engagements by the U.S. Armed Forces.

Find publications relating to the activities and purposes of the military outside of armed combat (for example, National Guard deployment after a hurricane or Coast Guard patrol for drug smugglers).

Compensation in the Military

Works under this category address military pay and benefits, veteran-related benefits and military pensions, war claims against the government, uniform allowances, and more.

Find publications that review military spending and the methods and end results of using appropriated monies.

Diversity in the Military

Works under this category address diversity and inclusion initiatives and reports.

Ethics and Law of War

Works under this category discuss wartime ethics and law, addressing issues such as rules of engagement, war crimes, terms of occupation, prisoners of war, and more.

Learn about the military chain of command, the organization and functioning of top management personnel, and items exploring the effectiveness of civilian control of the armed forces.

Find content relating to the establishment and maintenance of military bases, camps, and other facilities under Department of Defense jurisdiction.

Learn about disciplinary and legal proceedings within the military through JAG publications, court martial handbooks and proceedings, and other related materials.

Find titles that discuss activities relating to attracting and selecting people for military training and employment, as well as retaining those employees.

Discover publications relating to the military as a workforce, addressing concerns such as discrimination, harassment, retaliation, policy violation, and other personnel issues.

Discover titles relating to the security and defense of the United States.

Learn about instances of unwanted sexual behavior in the military and the resulting investigative and disciplinary process.

Works under this category address military and government activities related to terrorism, revolts, uprisings, and other forms of political violence.

Find titles relating to veteran concerns and the Department of Veterans Affairs, including issues such as access to health care, post-traumatic stress disorder (PTSD), acclimation to civilian life, homelessness, and more.

Women in the Military

Understand the changing role of women in the military and related issues, including women in combat and women in the draft.

Find thousands of reports on a diverse range of topics, including weaponry, naval ships, troop levels, courts martial, and more. 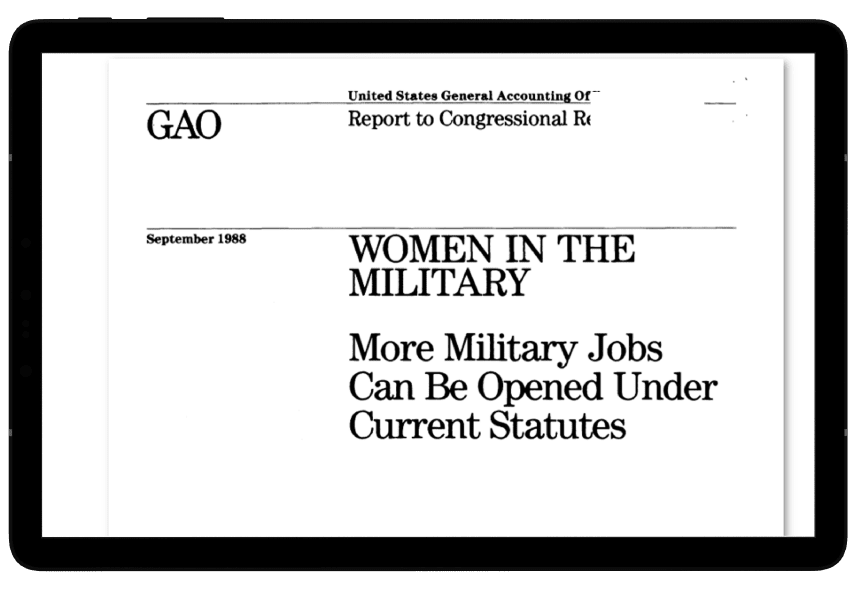 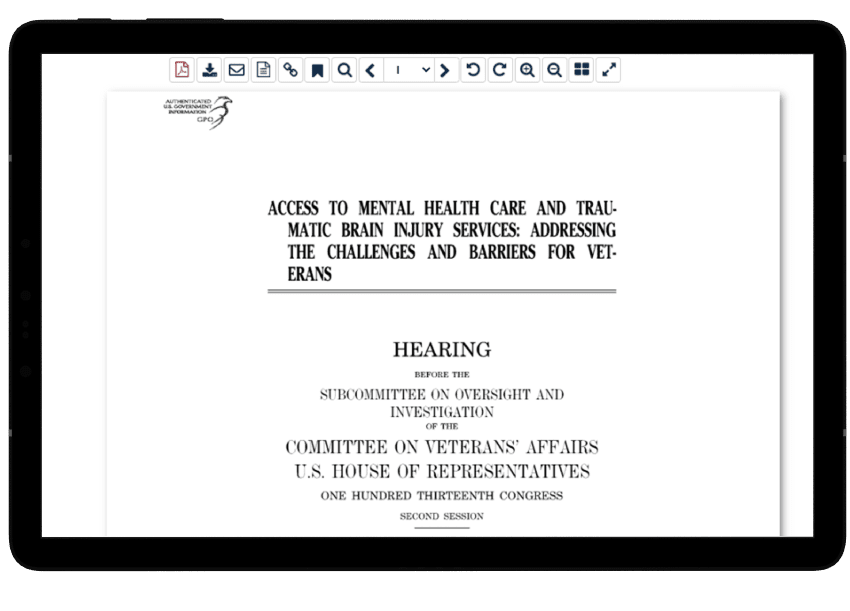 Browse thousands of books, periodicals, serials, and articles ranging in date from the 1700s to present day. 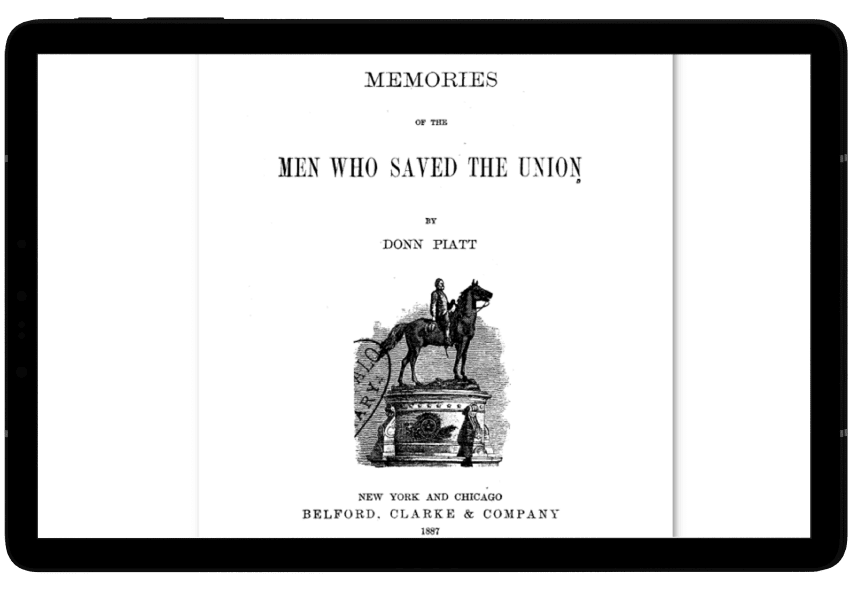 Find the entirety of a multitude of U.S. Code and Code of Federal Regulations titles relating to the military, national security, and veterans.

Using the Military and Government Database